From parking your car 50 feet from a campsite to hiking 50 miles over a few days or canoeing 50 miles between campsites, breakfast really does become the most important, and most special, meal of the day. As a yongster the smell of bacon on a chill morning was glorious…now it is coffee first then bacon! Camping excursions vary greatly. As a result, the tools to cook with will vary as well. We’re going to think in terms of the better equipped model here. A propane stove with two burners would be ideal, but a sturdy metal grate over open flame and coals will work just fine too. Depending on crowd size, a cast iron skillet at a minimum is perfect. With more folks a griddle with a trough, that will span both burners or an expanse of open flame, will serve you better. Obviously a little working space is necessary. And a decent knife is a must have, for any kind of civilized cooking anyway.

With flame and hot metal, skillet or griddle, food is on the way in this one pan cooked breakfast. Our family favorite was bacon griddle cakes. You don’t even need strip bacon, those lumpy packages of bacon ends and pieces work great. 2. For our family Krusteaz was the brand of choice for pancake mix. Whatever your favorite is, mix it with tepid or even slightly warm water before you start cooking the bacon.

3. When you come back to it you will see that it has bubbled slightly which is just fine. Put a couple ounces of the cooked bacon bits on the pan and douse with about a tablespoon of the bacon fat. Pour your pancake batter right on top.

4. When the back of your pancake has bubbled across the entire top surface flip it over to finish cooking for a couple of minutes.

5. Remove the cake and fry an egg to set on top, or go with maple syrup and butter for a classic taste.

If this is day two of your trip here’s another fun way to go. For dinner the night before, plan on baked potatoes wrapped in foil and cooked in the coal and ash of your campfire. We refer to this as shovel cuisine. Make a couple extra taters and set them aside for the next morning, preferably somewhere the raccoons won’t find them. Our first night in the woods was always a feast, with the centerpiece being a huge marinated chuck steak charbroiled to perfection, or whatever doneness, it didn’t matter too much. There were always leftovers. Sometimes they appeared as thinly sliced meat for sandwiches. Sometimes they appeared diced up and used instead of the bacon for a country scrambled steak and eggs.

Pull the same trick with bacon bits and saving the oil. Dice an onion and the taters. Heat your skillet, add some bacon fat. Throw in the taters and onions. Cook them until they have a browned nicely. Throw in your bacon bits and/or some steak bits. Whisk enough eggs for your group, and add them after the meat has had a chance to warm up. Keep it all moving on the heat until the eggs are scrambled to your preferred degree of doneness. Plate it up the country scramble and sprinkle with a generous handful of shredded sharp cheddar cheese.

Cock-Eyes (AKA Eggs in a Basket)

For slightly lighter fare, try what we always called ‘cock-eyes’, something which most families have their own name for but most commonly referred to as eggs in a basket. The opportunity to mix it up is as wide open as the great outdoors. Bring along your favorite sausage links or patties for the first two recipes, or as a side item. The savory oil they throw off will make for great flavors.

Not vegan, but meat free, do the country scramble by browning the onions and potato in butter before adding the eggs. Add in peppers, sweet bell or the spicy kind, to give you the flavor profile that works for you and your soon to be happy campers. 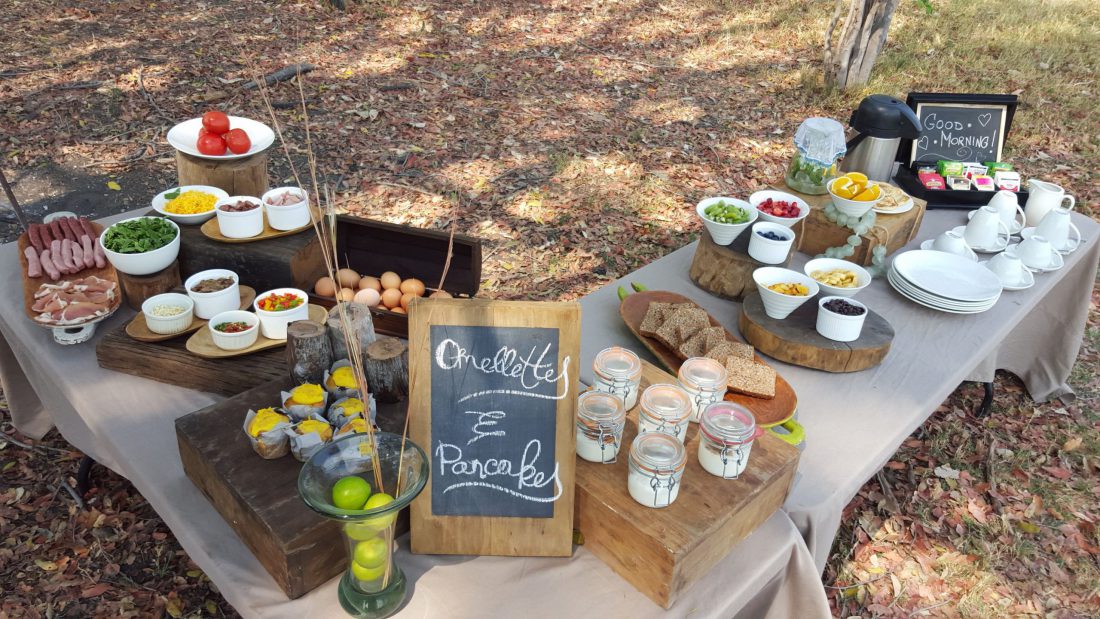